The serious, devoutly religious mysticism of the early Romantic artists (such as Caspar David Friedrich (1774–1840) in the north and the Nazarenes in the south) differed sharply from the fanciful imaginativeness of the later adherents of the movement, such as Moritz von Schwind (1804–1871). Like many other popular artists of the Biedermeier period, Schwind was more interested in the anecdotal than the purely symbolic or allegorical. The subject of the painting reproduced below is the legend of the knight Kuno von Sayn, who fell in love with the daughter of the castle lord von Falkenstein. The lord would only consent to the marriage if Kuno managed to create an accessible pathway through the impassable cliffs leading up to his castle—all in one night. In the end, Kuno achieved this monumental task with the help of underground elves, who offered their assistance in exchange for his promise to close down all of the silver mines in the mountain heights. This painting shows Kuno as he approaches the castle on horseback to claim his bride.

A close friend of the composer Franz Schubert (1797–1828), who revolutionized the narrative song cycle, Schwind also attempted to endow his paintings with a musical rhythm. The combination of musical, literary, and painterly elements in Schwind’s work, like that of other members of Schubert’s circle, embodies the mid-century’s growing fascination with the idea of a universal art form that would eventually find its strongest expression in Richard Wagner’s Gesamtkunstwerk (total work of art). 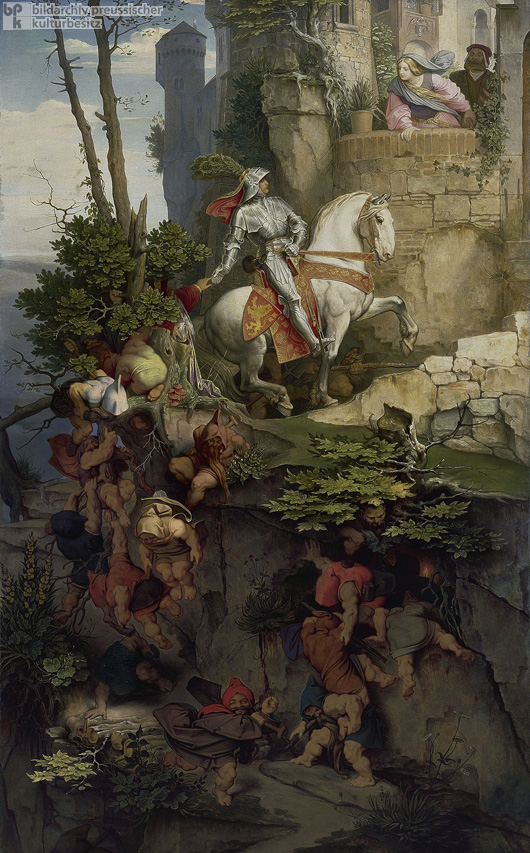 Reproduction: bpk-Bildagentur, image number 00044700. For rights inquiries, please contact Art Resource at requests@artres.com (North America) or bpk-Bildagentur at kontakt@bpk-bildagentur.de (for all other countries).