From the autumn of 1814 until June of 1815, representatives of the European powers participated in the Congress of Vienna under the presidency of Austrian chancellor Prince Clemens von Metternich (1773–1859). The primary task of the Congress of Vienna was to settle upon a new dynastic and territorial organization of Europe in the wake of Napoleon’s defeat. The Congress made decisive changes to the political map of Europe: borders were redrawn, states reorganized, and territories ceded or annexed. France’s one-time hegemonic power was replaced by a new politics of European equilibrium. The old dynasties were largely restored on the basis of the principle of legitimacy, and the period of so-called Restoration thus began. Prussia’s acquisition of territory along the Rhine was probably the most consequential change introduced by the Congress of Vienna, for with this new land Prussia gained a “bulwark” against France. Also significant was the founding of the German Confederation, which originally united 35 sovereign states and four free cities (Lübeck, Bremen, Hamburg, and Frankfurt) under the leadership of Austria. The constitutional basis of the Confederation was the German Federal Act (which was later supplemented by the Final Act of the Viennese Ministerial Conferences of 1820); the Confederation's highest authority was the Federal Assembly, which met in Frankfurt am Main and included envoys from all the individual states. When compared with the Holy Roman Empire of the German Nation, the German Confederation certainly represented a move toward modernization, above all in terms of structure. Nonetheless, it opposed the burgeoning national and liberal-constitutional movement. Additionally, the implementation of Article 13 of the Federal Act, which promised each state a constitution, was pursued only hesitatingly in most states. As a result, tensions surrounding the “German question” would become increasingly heated in the following decades.

The Parisian court painter Jean Baptiste Isabey (1767–1855) traveled to Vienna as part of the French delegation. There, he executed portraits of each of the 23 participants; these studies eventually formed the basis of his famous group portrait. (The etching reproduced below was done after Isabey’s original painting of 1815.) Metternich, who dominated the Congress, can be seen (standing) toward the left side of the image; he gestures toward the British Secretary of State, Viscount Robert Castlereagh, who is seated in a rather relaxed fashion in the center. Across from him sits Prussian Chancellor Karl August von Hardenberg (lower left corner). Standing behind Hardenberg is England's Duke of Wellington. On the right side of the portrait, the French diplomat Charles Maurice de Talleyrand-Périgord rests his right arm on the table. The composition emphasizes the fact that Talleyrand enjoyed an equal place at the negotiation table—this, despite the fact that he was representing a defeated France. Wilhelm von Humboldt stands second from the right. Count Rasoumoffsky, the representative of Czar Alexander I of Russia, appears near the middle of the portrait; he stands before the lower left corner of the large portrait on the wall. The etching dates from 1819 and is presumably the work of Jean Godefroy (1771–1839). 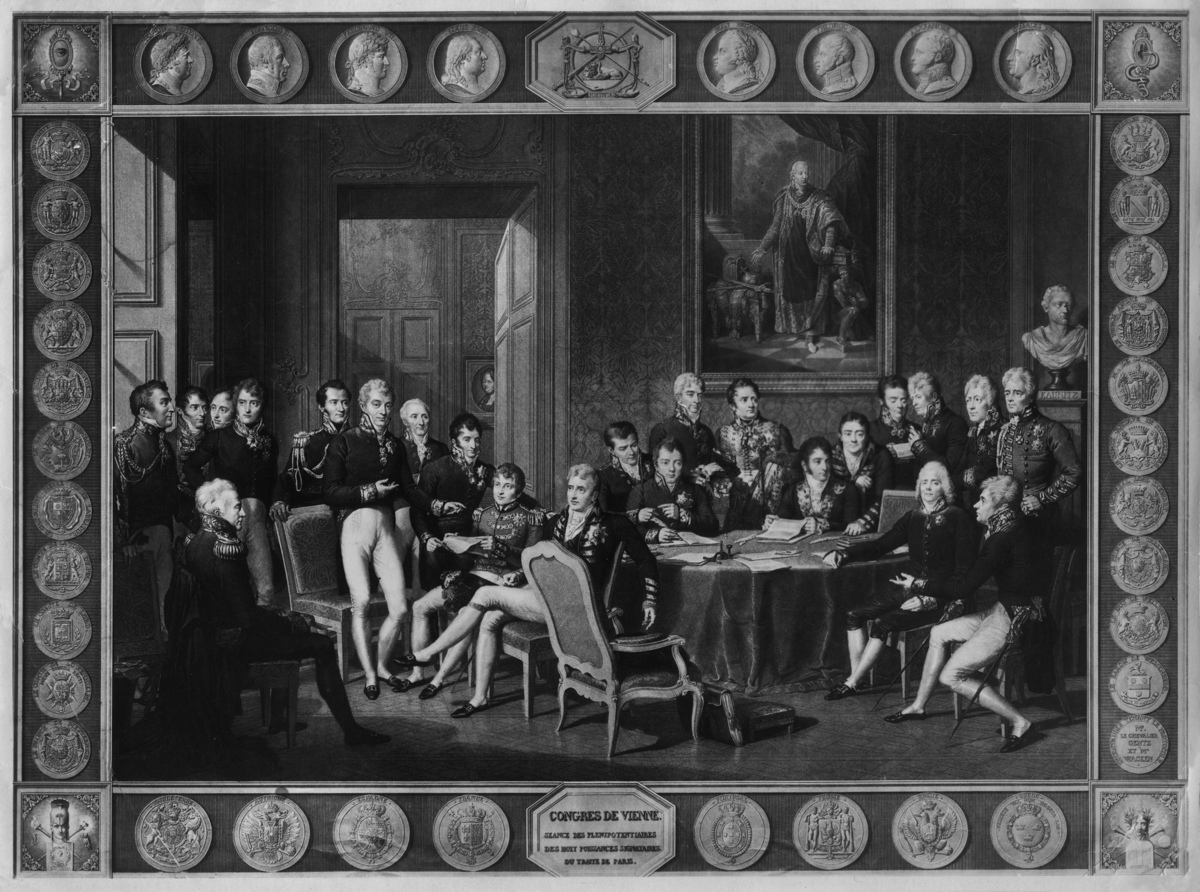 Source: bpk-Bildagentur, image number 30011286. For rights inquiries, please contact Art Resource at requests@artres.com (North America) or bpk-Bildagentur at kontakt@bpk-bildagentur.de (for all other countries).