Mockery of Ultramontanism and Obscurantism in the Roman Catholic Church (c. 1847)

The backdrop to this anti-Roman Catholic caricature is the foundation of the German Catholic Church in 1845. That year, the Catholic priest Johannes Ronge (1813–1887; second from left), who had been excommunicated on account of an open letter in which he attacked superstitious idolatry (for example, the worship of relics such as the Holy Shroud of Trier), called for the establishment of an enlightened German Catholic Church independent of Rome. The reform movement was also supported by the Protestant Church (represented by the Protestant priest on the far left) and Robert Blum (1807–1848), who went on to lead the democratic left in the Revolution of 1848 before being executed by imperial troops in Vienna in November 1848. The left side of the lithograph features the glorious edifice of the gleaming new church, whose 1845 founding date floats in the air underneath beams of light. The large crowd of worshipers congregated around the church testifies to its popularity. In the left foreground, the soberly dressed figures of Ronge, Blum, and the Protestant priest constitute an upright, orderly trio. All three men have messages for the unruly mass of Roman Catholic monks and lavishly dressed priests who occupy the darker right half of the image. The priest holds out a sheet of paper that reads “Rechtfertigung” (a reference to the reformist idea that sinners would be saved by faith alone, not good works); Ronge presents the group with the doctrines of the German Catholic Church, and Blum’s message would seem to indicate that this new church would take hold throughout the entire German Reich. The Catholics, who presumably recoil in fear, lack none of the trappings of wealth, pomp, ritual, and superstition for which they had been criticized since the days of Martin Luther: they have come, for instance, with the Holy Shroud, rosaries, and incense burners. Fleeing in panic and disarray, they have dropped two items on the ground, a Bann Bulle, or a letter of excommunication, and a Päpstliche Bulle, an official papal decree. Lithograph by unknown artist, c. 1847.

Mockery of Ultramontanism and Obscurantism in the Roman Catholic Church (c. 1847) 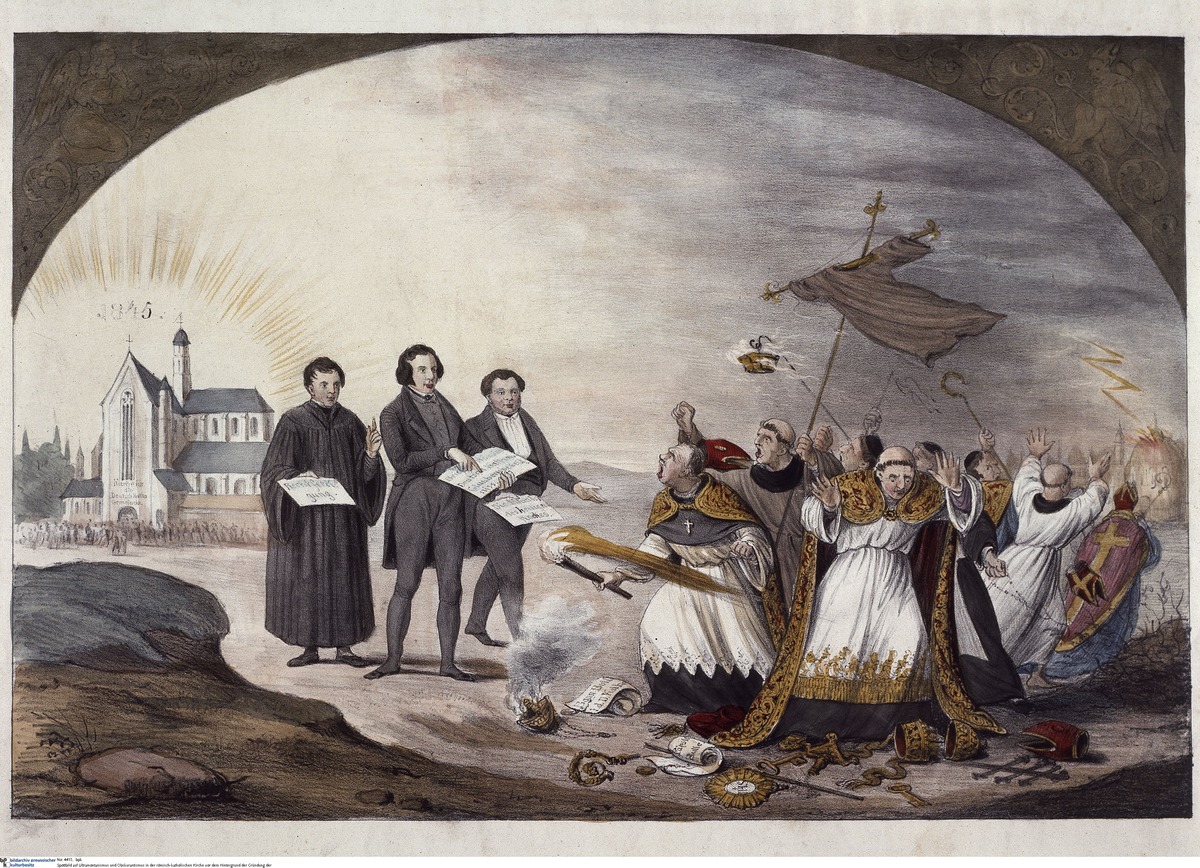 Source: bpk-Bildagentur, image number 00004415. For rights inquiries, please contact Art Resource at requests@artres.com (North America) or bpk-Bildagentur at kontakt@bpk-bildagentur.de (for all other countries).

Mockery of Ultramontanism and Obscurantism in the Roman Catholic Church (c. 1847), published in: German History in Documents and Images, <https://germanhistorydocs.org/en/from-vormaerz-to-prussian-dominance-1815-1866/ghdi:image-2274> [February 02, 2023].
The Holy Robe of Trier (1844)
Ludwig von Rohden, Excerpts from History of the Rhenish M...