The first half of the nineteenth century saw the first signs of the all-encompassing conflict between the Prussian state and the Roman Catholic church that would eventually erupt in the 1860s and 1870s and come to be known in history as the Kulturkampf, or cultural struggle. Forced into action by Prussia’s insistence on the legitimacy of “mixed marriages” between Catholics and Protestants, the emergence of an anti-Roman German Catholic movement, and the imprisonment of the unyielding archbishop of Cologne in 1837, the Roman Catholic Church believed that it was finally regaining the upper hand when the new Prussian king, Friedrich Wilhelm IV (1795–1861), acceded to the throne in 1840 and consented to most of the church's demands. In 1844, amidst this atmosphere, the Bishop of Trier, Wilhelm Arnoldi (1798–1864), succeeded in mobilizing about half a million Catholic believers for a pilgrimage to the Holy Robe of Jesus, which was then on public display. This caricature is a vitriolic response to what many saw as Catholic obscurantism and naïve superstition. By depicting clergy and pilgrims as bellwethers, sheep, donkeys, and other gullible animals, it also criticizes the financial aspect of pilgrimages and relics. On a map in the background, the black spider sits in Rome, spinning a web of intrigue. Lithograph by unknown artist, 1844. 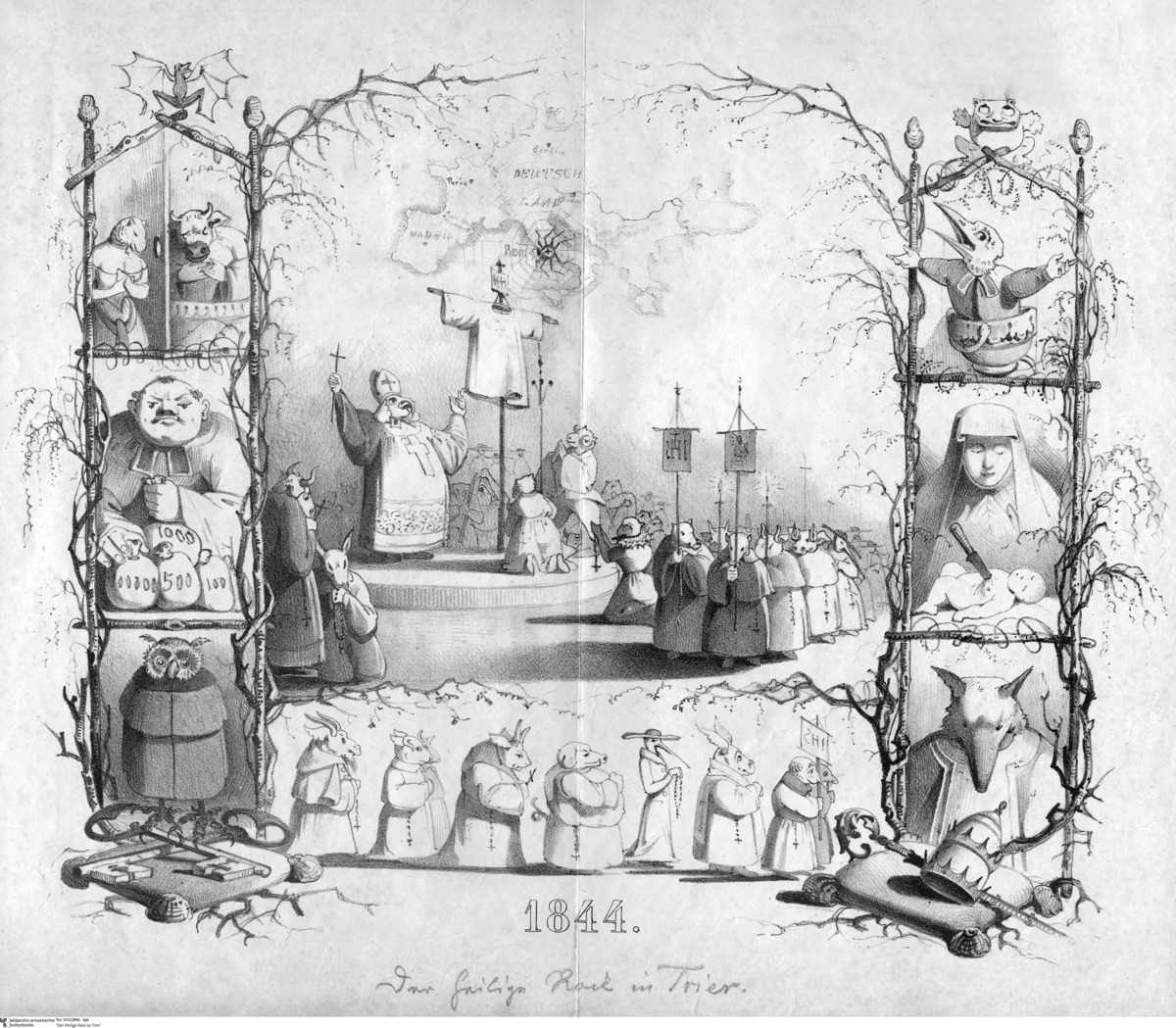 Source: bpk-Bildagentur, image number 30028996. For rights inquiries, please contact Art Resource at requests@artres.com (North America) or bpk-Bildagentur at kontakt@bpk-bildagentur.de (for all other countries).

The Holy Robe of Trier (1844), published in: German History in Documents and Images, <https://germanhistorydocs.org/en/from-vormaerz-to-prussian-dominance-1815-1866/ghdi:image-2277> [February 02, 2023].
Jakob Marx on the Exhibition of the Holy Robe in Trier (1...
Mockery of Ultramontanism and Obscurantism in the Roman C...