The defeated and exiled Napoleon watches from Elba as the leaders of the Restoration, (from left) Czar Alexander I of Russia (1777–1825), Emperor Francis I of Austria (1786–1835), and King Friedrich Wilhelm III of Prussia (1770–1840), divide Europe anew. Great Britain, the fourth power, is not represented in this image, because the territories it conquered in the Napoleonic Wars were not the subject of these negotiations. At the beginning of the Congress, the rulers shown here were certainly not of one mind. There were substantial conflicts of interest, with Russia laying claim to the entire Polish territory, and Prussia claiming the Kingdom of Saxony. Objections to both were raised above all by Austria on the grounds of political security. Eventually, it was agreed that Prussia would cede territory in the south and north of Germany to Bavaria and the Kingdom of Hanover and transfer territory it had acquired in the third division of Poland to Russia. In exchange, Prussia was given Swedish Pomerania, the Rhine Province, an enlarged Westphalia, and nearly half of Saxony. After Russia was granted the greater part of Poland in addition to Finland, it commanded more land than any other power. Austria ceded Belgium to the Netherlands, and Breisgau and its neighboring territory were given to Baden and Württemberg. For this, Austria saw all of its former territories returned (including the wealthy provinces of Lombardy and Venice in northern Italy, Tyrol, and territories in Poland). In the end, France (represented here as a distant observer in the person of Napoleon) managed to participate in the negotiations as an equal partner, thanks to the skill of the French envoy Talleyrand. Here, it should be noted that no territorial losses or reparations payments were initially imposed on the restored Bourbon king, Louis XVIII. Shortly before the conclusion of the Congress of Vienna, however, Napoleon made one last attempt to seize power in France, a quest that ended one hundred days later with his famous defeat at Waterloo. Thereafter, the remaining Great Powers saw no grounds for further leniency: France lost a significant portion of its territory and was ordered to pay reparations in the amount of 700 million francs. Talleyrand’s efforts to free his country from isolation thus came to nothing. At the same time, however, the very success of the incipient policies of the Congress depended upon France’s role as an outsider. Aquatint by Johann Michael Voltz (1784–1858), 1815. 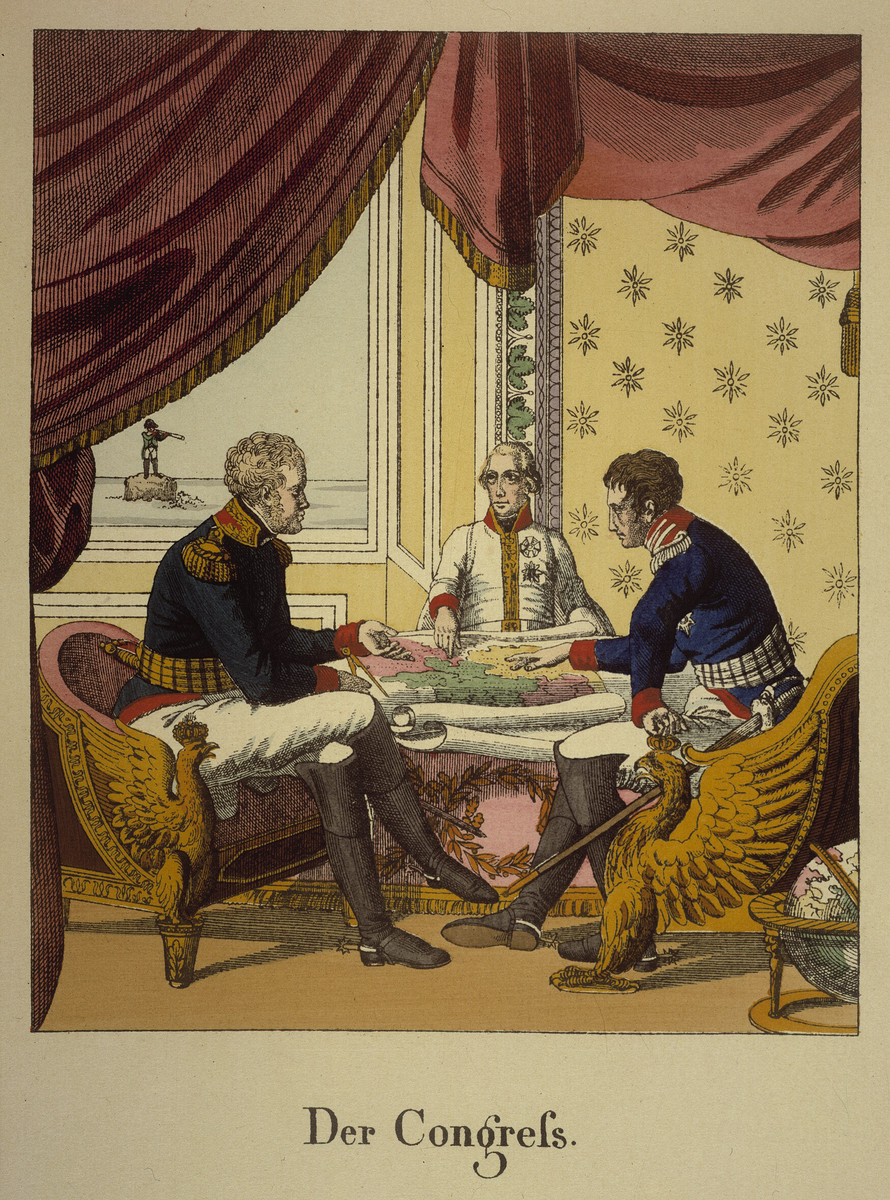 Source: bpk-Bildagentur, image number 00001142. For rights inquiries, please contact Art Resource at requests@artres.com (North America) or bpk-Bildagentur at kontakt@bpk-bildagentur.de (for all other countries).