During the period of restoration following the defeat of Napoleon in 1815, the European powers, led by Austrian chancellor Prince Clemens von Metternich (1773–1859), restricted freedom of speech and opinion in order to contain any type of critical, nationalist, or anti-authoritarian movement. The copperplate engraving reproduced below is a caricature of press censorship prior to the 1848 Revolution. In the face of repressive measures, the Janus-faced journalist has been forced into a delicate dance around the hot issues of the day, since any treatment thereof could land him in jail. These “eggs” include questions relating to the parliamentary chamber [Kammer Frage], the franchise [Wahl-Recht], repressive laws [Repressiv Gesetze], the budget [Budget], and freedom of association and associations [Associations Recht]. The journalist cuts a curious figure, not least because he is presented as part court jester (his checked leggings), part itinerant trader (note, for example, that he carries all of his wares with him). Moreover, he holds a pen that doubles as a wind vane—a cue perhaps that he would be well advised to direct his writing in whatever direction the official wind blows. The figure has caught the advance payment “bait” [Pränumeranten-Köder] on his fishing rod and half of his Janus-faced mask toots the horn of approval. Altogether, his paraphernalia does not bode well for freedom of the press: his “paper” hat is made of waste paper [Maculatur]; his editorial secrets [Redactions Geheimniße] are locked in a bag; his criticism [Kritik] is in an incense burner; and he is literally carrying “canards” [Journal Enten]. Copperplate engraving by Andreas Geiger, c. 1840. 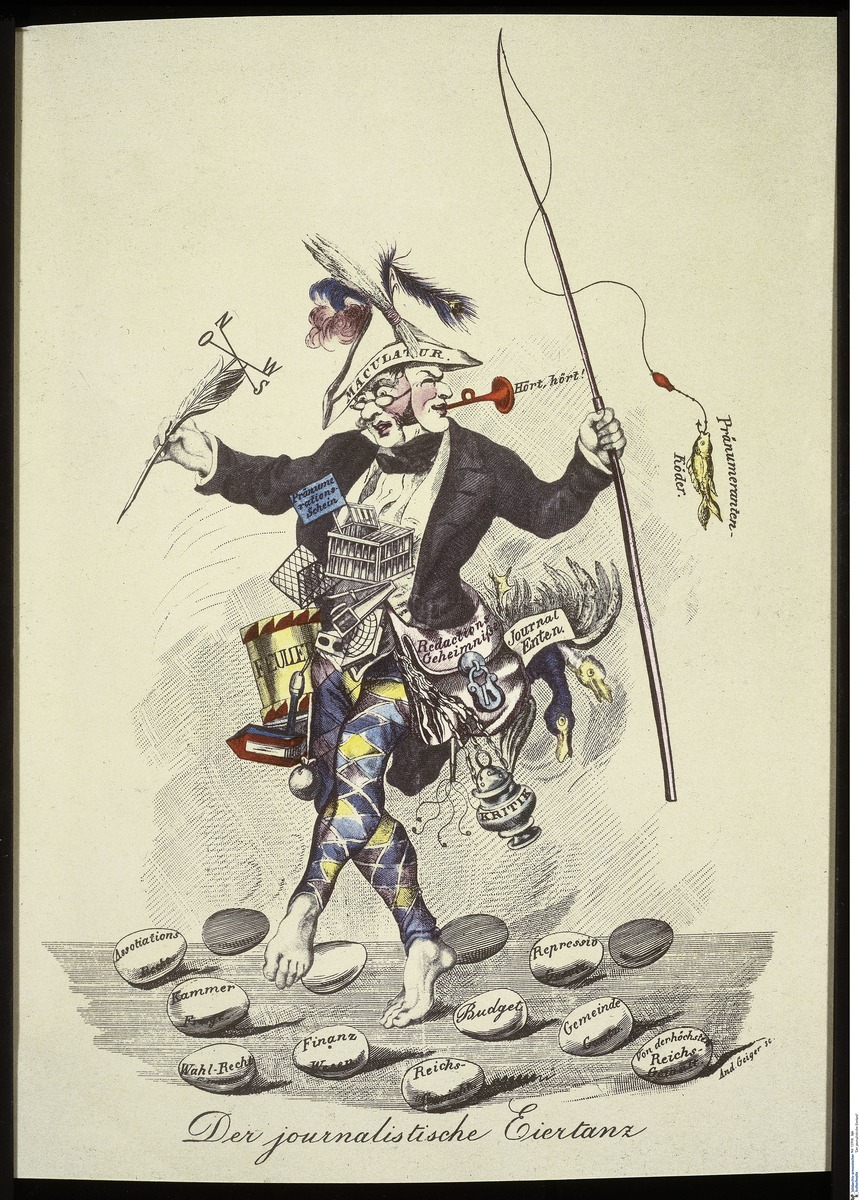 Source: bpk-Bildagentur, image number 00012708. For rights inquiries, please contact Art Resource at requests@artres.com (North America) or bpk-Bildagentur at kontakt@bpk-bildagentur.de (for all other countries).