This painting shows the view from a back window in Carl Blechen’s (1798–1840) apartment on Kochstrasse in Berlin. The scene is interesting for many reasons, not least because it documents the uneven nature of Berlin’s urban development. Kochstrasse was just a few blocks south of Schinkel’s famous theater [Schauspielhaus] on the Gendarmenmarkt. In fact, its proximity to representative Berlin is evidenced in the background at the left, where we see the backs of the grand buildings that lined the upscale Friedrichstrasse. This part of town, however, was decidedly more modest and inhabited largely by craftsmen and other skilled workers. Although Blechen was a professor of landscape painting at the Berlin Academy and enjoyed the support of cultural luminaries such as Bettina von Arnim, he did not command high prices for his paintings, and they did not sell as well as he felt they should. In the 1880s, Blechen was rescued from obscurity by a retrospective at Berlin’s National Gallery.

Like Adolf von Menzel, Blechen was praised by later critics and artists whose modernist tastes led them to value only a limited aspect of the painter’s prolific production. This view of rooftops and gardens, for example, would have been prized for its rough brushwork, simple, slice-of-life subject matter, and arbitrary cropping. Like Menzel’s Balcony Room, which was painted more than a decade later, Blechen’s View of Rooftops and Gardens appears to have originated purely as a record of the artist’s private experience of his intimate surroundings. The notion that a work of art should be valued mainly as an expression of an artist’s singular, subjective idea—not as a depiction of a story, a form of praise to God and the monarchy, or the presentation of a beautiful appearance—was of course attributable to Romanticism. 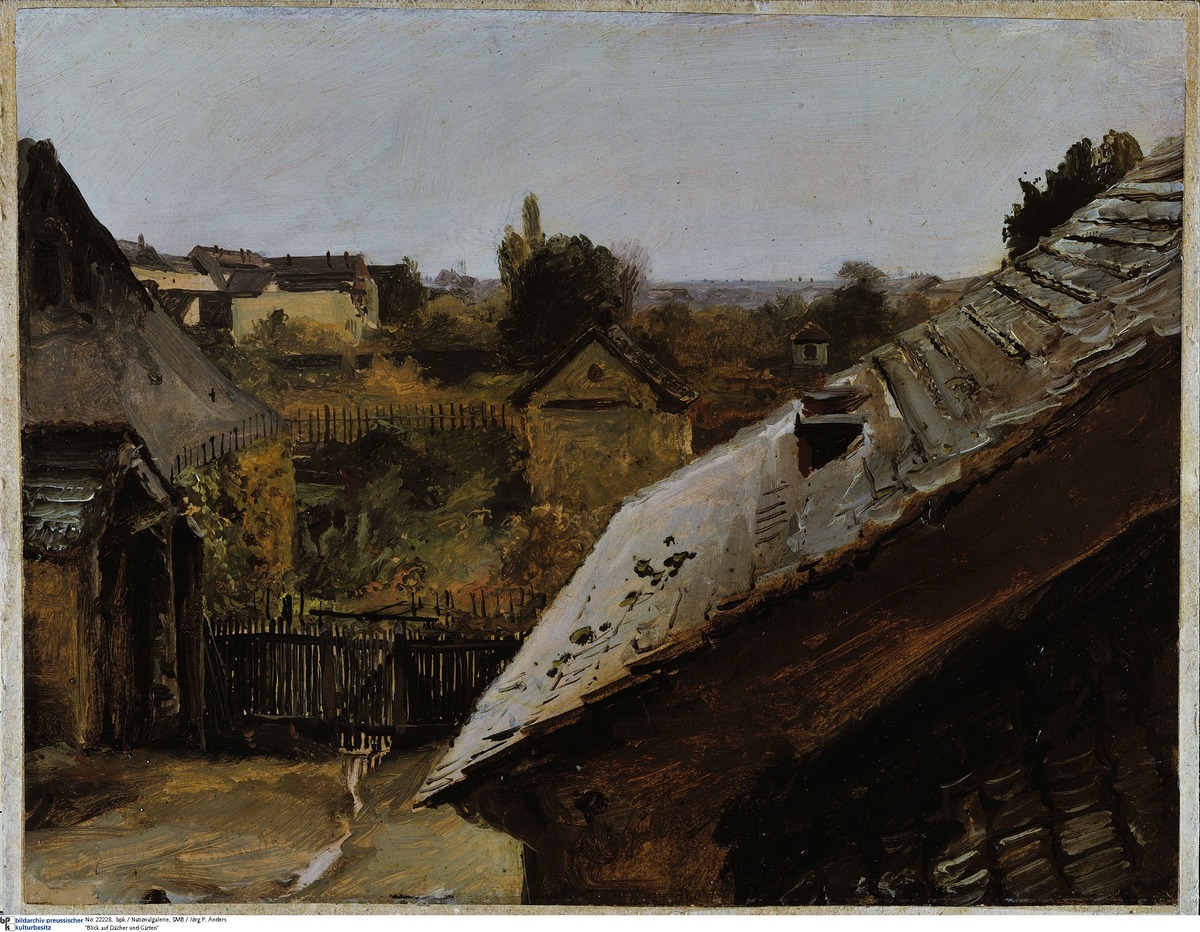 Reproduction: bpk-Bildagentur, image number 00022228. For rights inquiries, please contact Art Resource at requests@artres.com (North America) or bpk-Bildagentur at kontakt@bpk-bildagentur.de (for all other countries).

Carl Blechen, View of Rooftops and Gardens (1833), published in: German History in Documents and Images, <https://germanhistorydocs.org/en/from-vormaerz-to-prussian-dominance-1815-1866/ghdi:image-2872> [February 02, 2023].
Carl Blechen, The Interior of the Palm House on Peacock I...
Ludolf Wienbarg, Aesthetic Campaigns. Dedicated to Young...