Carl Blechen, The Interior of the Palm House on Peacock Island (1832–34)

Barely known outside of Germany, Carl Blechen (1798–1840) is one of the most seriously underappreciated masters in the history of nineteenth-century painting. Born too late to be a pioneer of Romantic painting, he was by temperament its greatest ironist. Unfortunately, due to a combination of typically Romantic ailments—including depression, alcoholism, and possibly syphilis—he did not live to witness the pan-European triumph of painterly realism over the Romantic myth of the primacy of artistic imagination. A largely self-taught, protean artist, Blechen was at first greatly influenced by the darker side of Caspar David Friedrich, pushing his subjects from the contemplative and melancholy toward the horrific and grotesque. Another formative influence was Schinkel, who helped the up-and-coming artist secure a post as a scene painter at the Königstädtisches Theater, a venue for popular comedies founded in Berlin in 1824. It was the perfect assignment for a painter who naturally saw all the world as a stage, and who in the face of the most Romantic subject matter—be it Gothic architecture or the landscape of Italy—never succumbed to the temptation to pull the viewer into an illusory world, to treat the canvas as a window into a space beyond.

Although, like Menzel, Blechen was later celebrated mainly for the portion of his work that appealed to post-Impressionist tastes by virtue of its sketchy execution and slice-of-life authenticity, his astonishing modernity is in fact in the best tradition of the great Romantic experiment. Like many German novelists—but few German painters—of the late Romantic era (e.g., E. T. A. Hoffmann and Jean Paul Richter), Blechen took high Romanticism's claim that art could parallel creation with a large grain of salt. His compositions, with their impassible rock outcroppings, high walls resembling theatrical backdrops, Christian pilgrims who sleep instead of meditating, and Italian peasants who masquerade as Mary and Joseph, all testify to a skeptical laughter (what the contemporary art critic Gustav Schöll called his "poetic cynicism") at the possibility of a seamless Romantic representation capable of communicating the full, exalted glory of an artistic vision to another mind.

The tongue-in-cheek attitude of late Romantic literature can be seen clearly in Blechen's The Interior of the Palm House on Peacock Island (1832–34). Commissioned by Friedrich Wilhelm III, the painting (one of several versions) portrays a conservatory designed by Schinkel in 1831 to house a large collection of tropical plants recently acquired by the king in Paris. The purchase of the plants itself exemplifies two important impulses of the era: scientific curiosity and the longing for exotic experiences outside the realm of the ordinary. Blechen combines the two perfectly: his almost overly detailed portrayal of the flora serves to document the collection while the heavily sensual atmosphere, complete with languid harem-girls, weaves an orientalist spell worthy of One Thousand and One Nights (which, in fact, was first translated into German around this time by Christian Maximilian Habicht). Still, the most prominent elements of the foreground are the clay pots and the cast-iron grill of the heating ducts—Blechen’s plain announcement that for all the heady atmosphere and lush plant life, the pictorial paradise is man-made and very limited. The true Romantic is a contrarian: what he creates with one hand he destroys with the other.

Carl Blechen, The Interior of the Palm House on Peacock Island (1832–34) 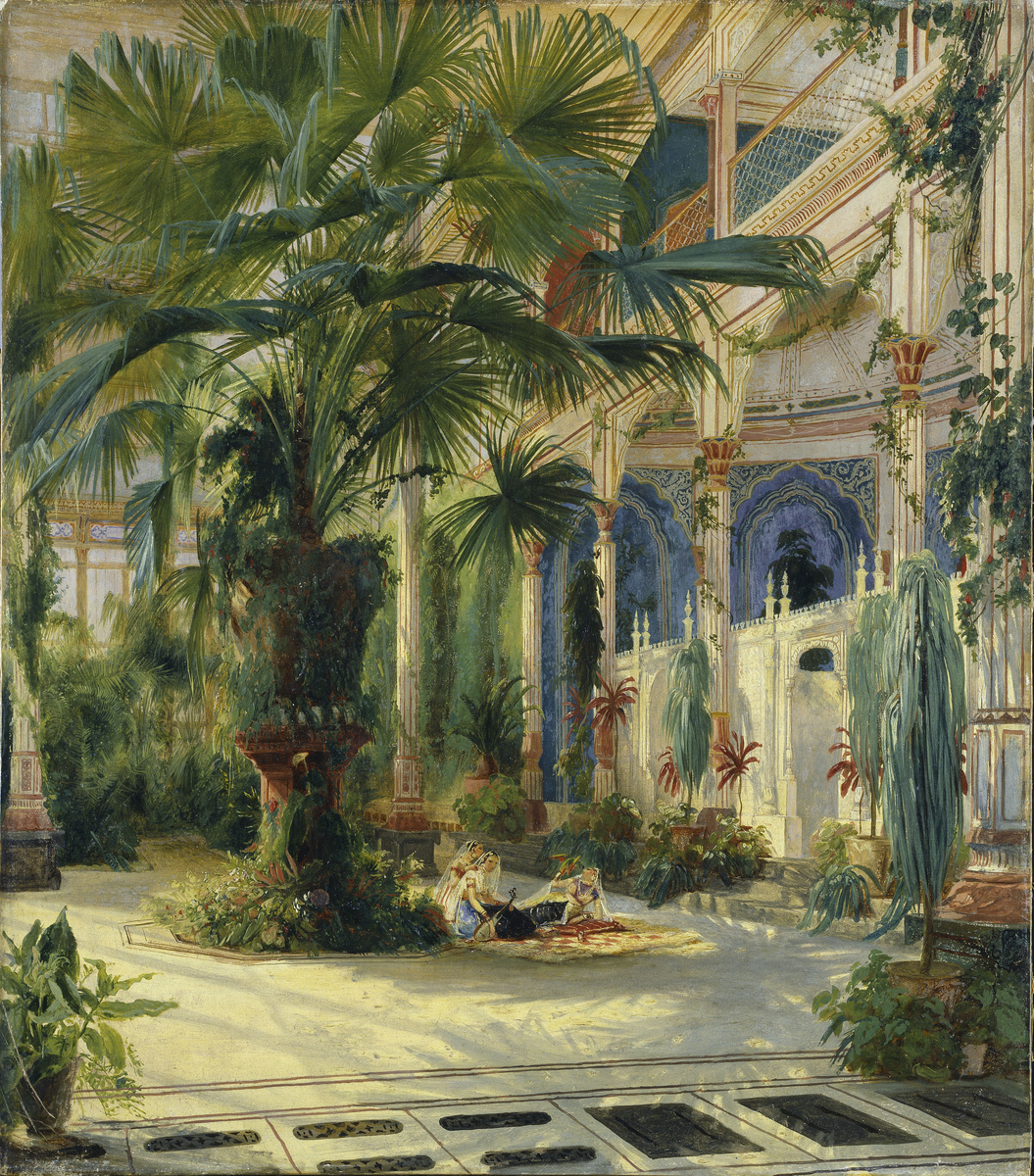 Reproduction: bpk-Bildagentur, image number 00030201. For rights inquiries, contact Art Resource at requests@artres.com (North America) or bpk-Bildagentur at kontakt@bpk-bildagentur.de (for all other countries)