As a genre of material culture, medallions were typically used to commemorate important events such as peace treaties or battles, or to honor rulers and other famous figures. Noteworthy anniversaries also served as occasions to market commemorative medallions. This medallion by engraver Carl Lesser of Breslau (now Wrocław) was issued on the 300th anniversary of the posting of Martin Luther’s Ninety-Five Theses on the door of the Castle Church in Wittenberg in 1517, the event generally regarded as founding moment of the Protestant Reformation. The face of the medal shows a well-rendered portrait of Luther in half-profile, along with his birth and death dates. The reverse carries the biblical verse from John 8:32, “The truth will set you free” above a Trinitarian allegorical image of a communion chalice, an open Bible, and a cross within a pyramid emanating rays of light, all of which sit atop a plinth bearing the date “The 31st of October, 1517.” Underneath is the phrase: “For the jubilee celebration of the third Reformat. festival, the 31st of Octob. 1817.” Note the hole that has been bored through the top of the medallion, likely by a previous owner, which would have allowed it to have been worn as a pendant or a fob. 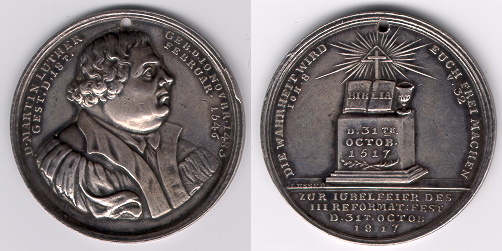 Luther Medallion for the Three-Hundredth Anniversary of the Protestant Reformation (1817), published in: German History in Documents and Images, <https://germanhistorydocs.org/en/from-vormaerz-to-prussian-dominance-1815-1866/ghdi:image-5017> [February 02, 2023].
Johann Baptist Pflug, Visit to the Protestant Pastor’s Ho...