Smugglers Disembarking at a River Bank (1830)

After the western German territories of the Rhineland and Westphalia were incorporated into Prussia at the Congress of Vienna (1815), Prussian import duties were introduced there. As this depiction shows, smuggling became a major problem as increased prices made contraband trade profitable. Although specifically Prussian, this phenomenon highlights the difficulties of integrating resistant regional populations; more generally, it also shows the continuation of the economic and political fragmentation of Germany. Woodcut after an 1830 painting by Emil Ebers (1807–1884)

Smugglers Disembarking at a River Bank (1830) 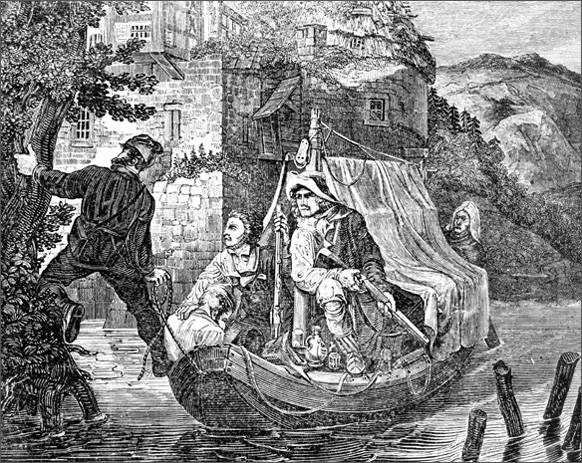 Smugglers Disembarking at a River Bank (1830), published in: German History in Documents and Images, <https://germanhistorydocs.org/en/from-vormaerz-to-prussian-dominance-1815-1866/ghdi:image-518> [February 02, 2023].
The Princess Charlott, the first Steamboat on the Spree (...
Friedrich Bülau’s Call for a Market-Oriented Solution to...