Caspar David Friedrich (1774–1840) is probably best known to today’s general public as a painter of exactly this sort of bleak, wintry landscape—a scene replete with graphic reminders of man’s mortality and of the loss of spiritual clarity once offered by the medieval church. Indeed, the motif of the pilgrim resting in a cemetery next to a ruined cloister at the end of his life’s journey—the waning of his days symbolically echoed by the lateness of the hour and the close of the year—preoccupied Friedrich throughout a career of approximately forty years. His zeal for the topic was fueled in part by his own deep religious convictions, in part by a general Romantic obsession with all things morbid and Gothic, and very likely also by a tragic formative experience in his childhood: witnessing his brother drown after falling through a patch of thin ice.

Winter – Cloister Ruins and Churchyard by the Sea (c. 1826) belongs to a seven-part sepia cycle portraying the stages of life from its divine origins (symbolized by the rising sun over an empty seascape) to its eternal triumph beyond the grave (the soul ascending to heaven in the company of angels). The full cycle was completed in 1826, and then repeated with only a few stylistic changes in 1834 (Friedrich died in 1840). A winter landscape very similar to the one reproduced below had already appeared in a four-part cycle of the seasons that Friedrich had drawn back in 1803. Incidentally, the summer drawing from this early cycle went on to serve as the basis for a pair of summer-winter paintings executed in 1808. The winter pendant (1808) portrayed a larger ruin in a snowy landscape and included a solitary monk walking toward a prominent, bare oak in the foreground. This painting, in turn, contained the germ of many subsequent works, such as the great Oak Tree in the Snow (1829), in which the very same tree, now the central focus of the canvas, stands guard over the corpse of a fallen, dead tree. Thus, the Romantic message contained in the representation of aging wanderers, crumbling arches, and half-buried graves was ultimately concentrated in the single iconic image of the ancient oak, at once a symbol of the dead, pre-Christian world and the everlasting life of the spirit, which—like the tree—was continually engaged in a cycle of renewal. 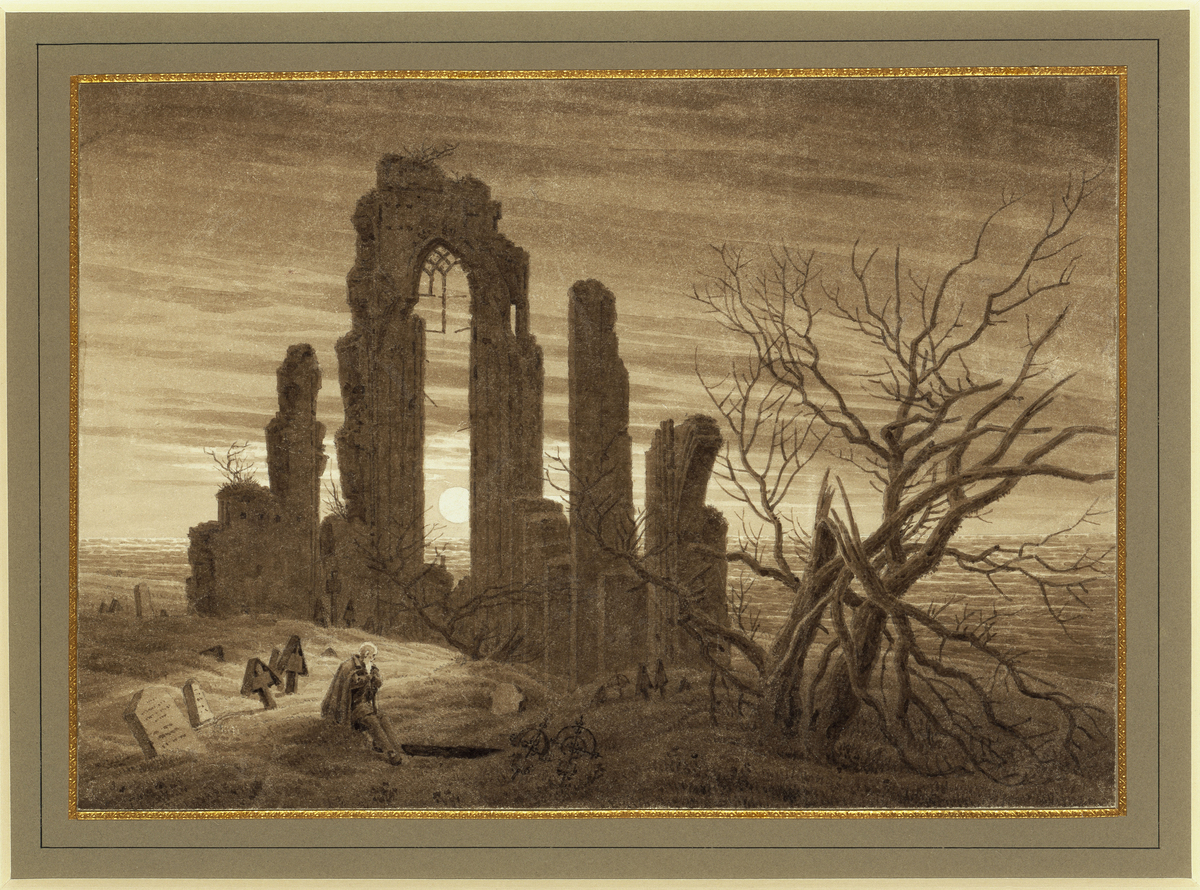 Caspar David Friedrich, Winter – Cloister Ruins and Churchyard by the Sea (c. 1826), published in: German History in Documents and Images, <https://germanhistorydocs.org/en/from-vormaerz-to-prussian-dominance-1815-1866/ghdi:image-2216> [February 02, 2023].
Joseph Anton Koch, Schmadribach Falls (1822)
Preface to the Second Edition of the Fairy Tales of the B...