This painting, which shows Caspar David Friedrich’s wife Caroline leaning out the window of his sparsely furnished atelier overlooking the Elbe River in Dresden, is at once highly unusual and absolutely exemplary in his oeuvre. It is unusual because, despite sharing his friend Kersting’s great admiration for seventeenth-century Northern painting, Friedrich never painted the domestic interior scenes that were so popular both during the Dutch Golden Age and the German Biedermeier period. Even in this unique example of the genre, however, Friedrich’s portrayal exhibits all the hallmarks of his style: the strict geometry of the composition (the vertical line of the window-pane even matches up exactly with the joint between the two central floor boards); the use of a Rückenfigur [a figure seen entirely from the back] placed squarely in the middle of the painting, as if to block our own view (compare her, for instance, to the figure in Wanderer above a Sea of Fog); the stark contrasts of dark and light coupled with incredibly nuanced gradations of color; the almost obsessively careful draftsmanship and naturalistic detail; and, of course, the inescapable, overwhelming sense that this picture, for all its realism, is trying very hard to tell us something about the spiritual, rather than the visible world.

Friedrich’s Caroline, leaning just slightly off-center in the cage-like grid, stands at the threshold between internal darkness and heavenly light, whose gorgeous yellow hue she takes in through an opening just barely big enough for her frame. Even in the absence of fog, sea, mountains, Gothic ruins, or any other overtly Romantic, sublime motif common in Friedrich’s paintings up to this time, the suggestion of a yearning to escape the prison of material life for the promise of something more is quite strong (especially in comparison to Kersting’s Before the Mirror, which features a woman who seemingly yearns to leave her room only to attract the attention of passing gentlemen). By the 1820s, however, the tide of critical taste had begun to turn away from heightened Romantic longing toward a more comfortably bourgeois notion of artistic truth, as offered up by Kersting. One reviewer complained in a Viennese feuilleton that Friedrich’s picture would have otherwise been very “true and pretty” had the painter not once again given in to his penchant for portraying people completely from behind, posed and lit in part in a rather unflattering manner. [“Ein kleines Bild … wäre sehr wahr und hübsch, wenn Friedrich hier nur nicht wieder seiner Laune gefolgt wäre, die er so sehr liebt, Personen nämlich gerade von hinten darzustellen, … teils in Beleuchtung und Stellung sehr unvorteilhaft…”; quoted in The Spirit of an Age: Nineteenth-Century Paintings from the Nationalgalerie Berlin, exh. cat. 2001, p. 70.] The age of the Romantic subject was slowly coming to an end, and Friedrich, once the darling of Dresden artistic and intellectual circles, had begun a painful decline into obscurity that only ended when the public was reintroduced to his art in the Centenary Exhibition at the Berlin National Gallery in 1906. 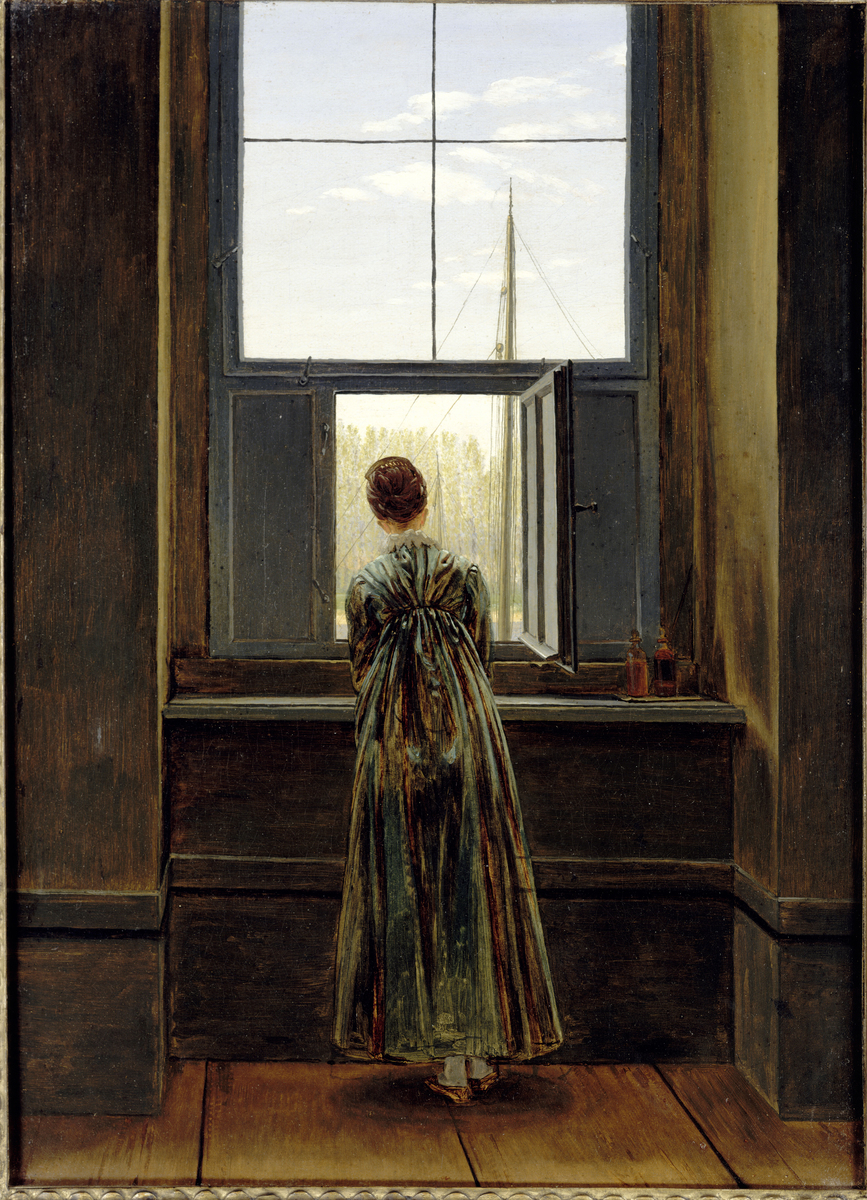 Reproduction: bpk-Bildagentur, image number 00015097. For rights inquiries, please contact Art Resource at requests@artres.com (North America) or bpk-Bildagentur at kontakt@bpk-bildagentur.de (for all other countries)