Caspar David Friedrich (1774–1840) was almost an exact contemporary of his fellow Pomeranian Philipp Otto Runge (1777–1810), and began his artistic career under the influence of the same heady mixture of early Romantic theory and northern Protestant pietism: Friedrich Wilhelm Schelling’s Naturphilosophie; Johann Gottlieb Fichte’s radical theories of the subject; the writings of Johann Ludwig Tieck, Novalis, and the Schlegels, in which the artist became the purveyor of a new religion; and a pantheistic Christianity that saw the spirit of God in every twig, leaf, and rock of the landscape. Like Runge, Friedrich was intensely interested in pursuing both highly subjective and deeply symbolic forms of communication through his art. Unlike Runge, however, Friedrich did not resort to mystical allegories and arabesque abstractions.

Combining a rigorously observed naturalism with a bold sense of composition and a dramatic flair for moody atmosphere, Friedrich has inspired generations of viewers to read in his landscapes the Romantic message of irrevocable spiritual loss and the elusive promise of renewal. The oak tree, placed prominently at the center of this picture, was one of several frequently recurring motifs in Friedrich’s art, present in his earliest works. Often portrayed as dead, dying, or bare in winter, it represents the heathen, pre-Christian worldview (according to legend, St. Boniface cut down the tree, sacred to the Teutons, in the eighth century and the evergreen Christmas fir sprouted in its place). By the same token, as the ancient tree associated with the original Germanic tribes, the mighty oak is also a great source of national pride, and was designated as the symbol of German patriotism by the eighteenth-century playwright Friedrich Gottlieb Klopstock. Here, however, it can be read as neither. The giant oak, though somewhat grotesque in its form, offers support to a wandering shepherd in a domesticated landscape that is far more pastoral than melancholy. A village stretches across the middle ground, and white plumes of smoke—comforting signs of human habitation—dot the foothills and mountains in the background. Even the mountains themselves seem not to evoke the majestic and unattainable, as in Wanderer above a Sea of Fog, but rather serve as a protective embrace for this dialogue between nature and culture. Indeed, the title, Solitary Tree, was not original to the painting. Rather, it was added much later by the early twentieth-century critics who, steeped in Symbolist and Expressionist art, rescued Friedrich from obscurity and launched his posthumous reputation as the most famous painter of the Romantic “mood.”

The picture was most likely called Village Landscape in Morning Light [Dorflandschaft bei Morgenbeleuchtung] and was meant as the pendant to the evening seascape, Moonrise on the Sea. (The pair was painted for the influential collector Joachim Wagener, whose collection forms a substantial portion of the holdings of the Berlin National Gallery). It is the latter picture, with its high-contrast lighting, barren rocks, and unbounded view of the watery horizon that seems far more solitary, despite the presence of three people at the center (including one in altdeutsch costume, which was banned by the restoration government in 1819 for its associations with the dissident political views of the republican patriots). In stark contrast to these three Rückenfiguren, the shepherd in the former picture is a far more integrated part of the landscape: a person in nature, rather than a removed viewer of nature as a fragmentary image. Throughout his lifetime, Friedrich produced several other pendants, or larger cycles, on the theme of times of day, seasons of the year, and stages of human life, in which the mood of the images similarly progresses from timeless, idyllic unity to modern isolation. 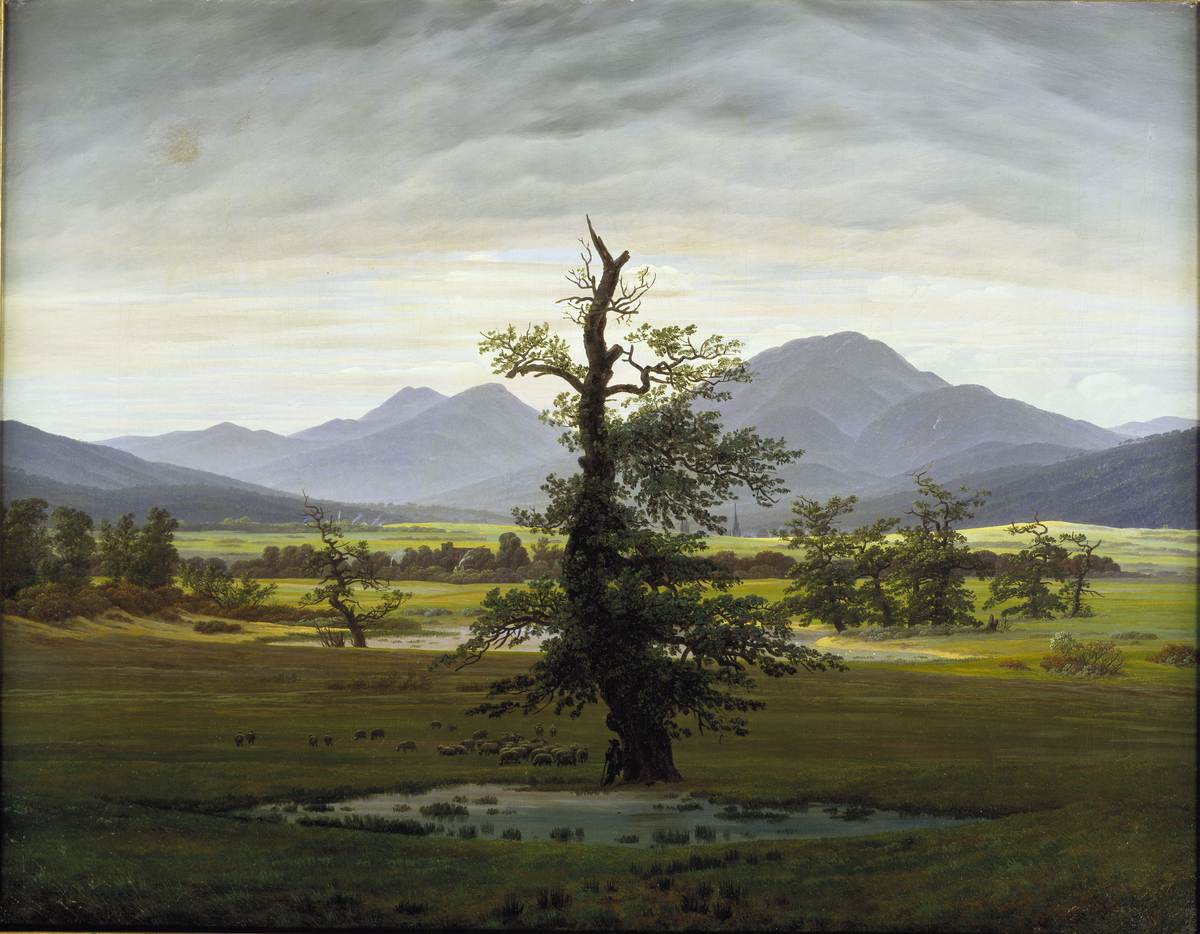 Reproduction: bpk-Bildagentur, image number 00005574. For rights inquiries, please contact Art Resource at requests@artres.com (North America) or bpk-Bildagentur at kontakt@bpk-bildagentur.de (for all other countries)