Georg Friedrich Kersting, Before the Mirror (1827)

Like his close friend Caspar David Friedrich, the artist Georg Friedrich Kersting (1785–1847) was from northern Germany, studied at the Copenhagen Academy, and eventually settled in Dresden. Friedrich belonged squarely to the first generation of Romantics—those who strove during the first decades of the nineteenth century to endow every aspect of the visible world with mystical, symbolic meaning. In contrast, Kersting, a full decade younger, took intimate pleasure in the mundane trappings of his bourgeois surroundings, thus exhibiting a hallmark tendency of the Biedermeier era. Kersting’s work harkens back to the art of the seventeenth century Dutch painter Jan Vermeer, another artist who worked in a culture of rising middle-class prosperity. In Friedrich’s famous painting Caroline at the Window [Caroline am Fenster] (1822), the artist’s wife quietly watches as the mast of a ship—a common symbol of man’s passage from this world to the next—passes before her. In Before the Mirror [Vor dem Spiegel] (1827), Kersting lavishes the same clarity of light, line, and composition on his own famous subject: a girl perfecting her coiffure. Like Friedrich’s figure, she is also viewed from behind. These similarities, however, belie significant differences between the two works. Kersting, for example, opts not to include spiritual or religious symbols in his painting; rather, he focuses his attention on the girl’s fashionable outdoor wardrobe, which rests prominently on the table in the foreground.

Georg Friedrich Kersting, Before the Mirror (1827) 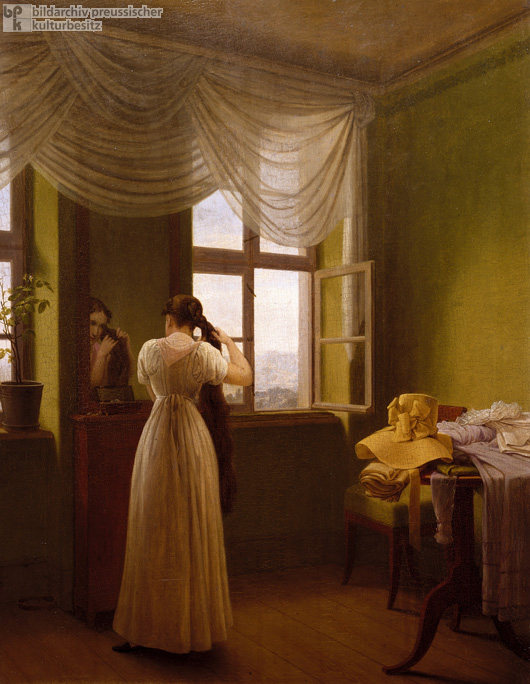