In 1847, King Friedrich Wilhelm IV of Prussia (1795–1861) convened the First United Landtag, or state parliament, in Prussia. (It was called the United Landtag because Prussia’s eight provincial state parliaments were represented.) When the king made this move, many of his subjects hoped that he was taking the first step toward drafting the constitution promised to each federal state in the German Federal Act. The Landtag was a bicameral body consisting of 617 representatives. The two bodies were called curiae—specifically, the three-estate curia and the noble curia. Representatives of the knighthood, the cities, and the rural communities [Landgemeinde] comprised the three-estate curia; the noble curia consisted of princes, counts, and the high nobility of the former Holy Roman Empire [Standesheeren]. The Landtag did not convene at regular intervals; rather, it was called to session when the state needed a new loan, wanted to introduce or raise taxes, or when the king regarded it as appropriate for a particular reason. During the 1840s, the financial needs of the Prussian state increased significantly, and the king’s decision to call the first United Landtag into being is largely attributable to this. (The expansion of infrastructure necessitated by industrialization proved to be extremely costly; this was true above all for the construction of the Eastern Railroad between Berlin and Königsberg, to which the state contributed financially.) In addition to financial reasons, the king’s decision was also rooted in his efforts, made in accordance with the monarchical principle, to strengthen the class system [Ständessystem] by giving it a parliamentary underpinning. Starting with his opening address to the Landtag, Friedrich Wilhelm IV made it clear that he in no way intended to grant Prussia a constitution. The king was convinced that his rule derived from the grace of God, and he would never stand for a “piece of paper” separating him from his people. Prussia thus remained a center of reactionary activity—that is, at least until it was shaken by the revolution of the following years.

The lithograph below shows the festive opening of the Landtag in the White Hall of Berlin's Royal Palace on April 11, 1847. King Friedrich Wilhelm IV is seated on his throne at the right; the representatives have risen in his honor. The opening ceremonies were dominated by symbols of monarchical power, and the representatives’ rigid seating plan—organized hierarchically according to class and geographically according to province—reflected the inertial persistence of the state, which rested on a class-based fundament. Contemporary lithograph by K. Loeillot de Mars (1803–1880). 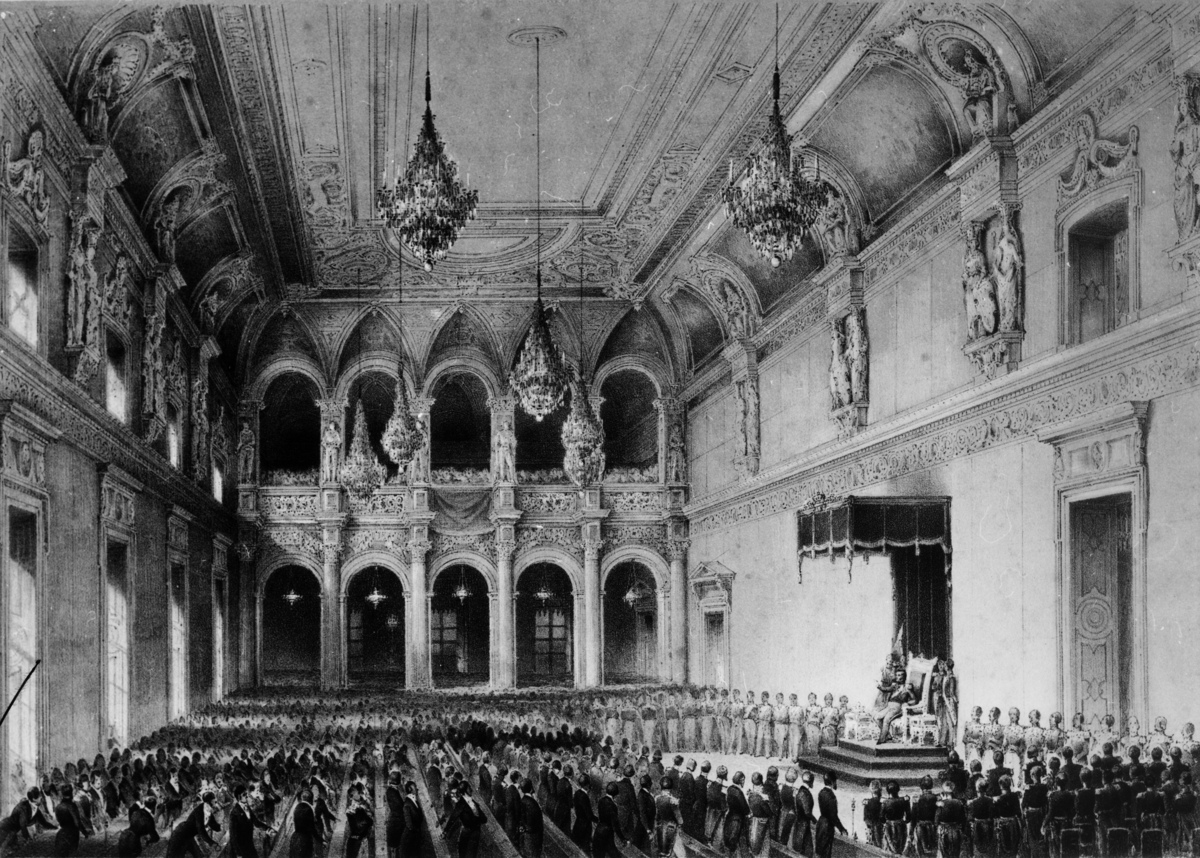 Source: bpk-Bildagentur, image number 30011246. For rights inquiries, please contact Art Resource at requests@artres.com (North America) or bpk-Bildagentur at kontakt@bpk-bildagentur.de (for all other countries).